I've been considering purchasing an "On Her Majesty's Secret Service" 40.6 x 50.8cm lithograph for many years now.  A series of these brilliant looking retrospective artworks were created by Jeff Marshall for the first 16 films, this OHMSS one in 2001, and all are officially licenced by the Bond producers (EON).  I believe only 1500 prints were created for each film title.

So a couple of weeks ago I finally took the plunge and purchased the OHMSS litho, and as an added bonus it was signed by George Lazenby.

I received it in a giant envelope on Thursday and it looks excellent.  The photo below doesn't really do the litho justice as it's still in a giant protective plastic sleeve added during shipping from the UK or US or somewhere.

I'm now not sure why I didn't purchase it sooner!  Can't wait to frame it. 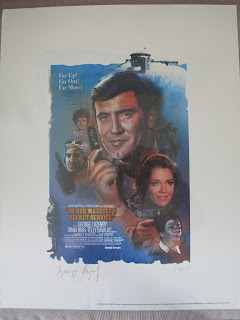