Random House Books Australia recently contacted me regarding the Bentley Edition of "Casino Royale".  For those not aware the Bentley Edition is a luxury limited edition hardback which was released late last year to celebrate the 60th anniversary of Ian Fleming’s first James Bond novel.  There were only 500 of these books printed and it turns out a number are still available for sale. 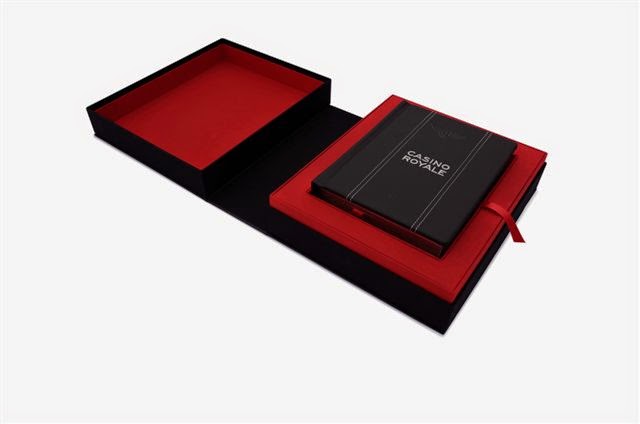 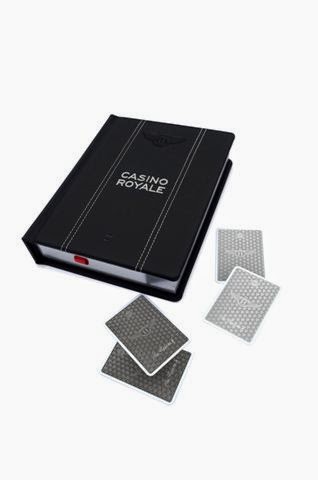 Now for the sake of honesty I don't own one of these books myself, but I would love to.  It looks great and the fact it's a reprint of the book that introduced James Bond 007 makes it even more desirable. 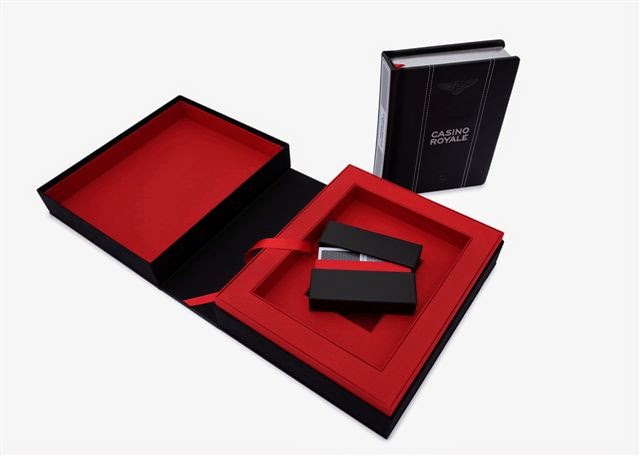 There is one negative though... the price.  However it is a limited edition and certainly looks as though for the money you'll be getting an ultra-quality Bond collectable. 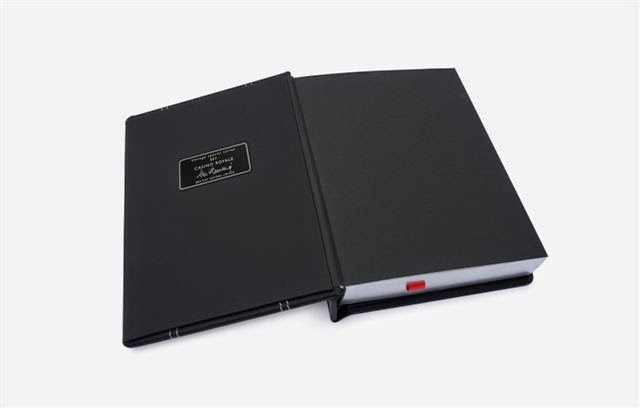 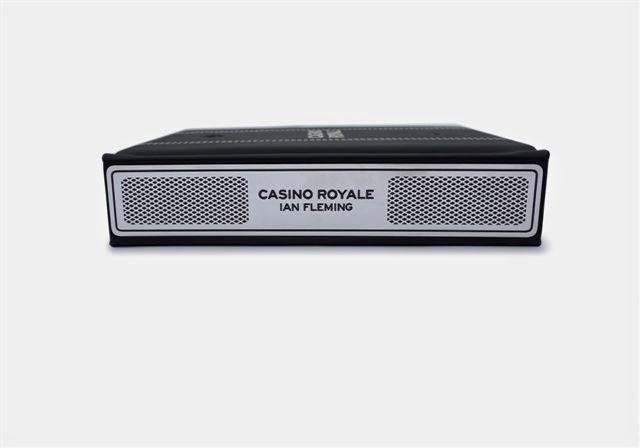 
Vintage Classics and Bentley Motors create luxury special edition to mark 60 years of Casino Royale
Featuring new introduction from Sir Stirling Moss
‘Bond’s car was his only personal hobby. One of the last of the 4 ½ litre Bentleys with the supercharger by Amherst Villiers, he had bought it almost new in 1933 and had kept it in careful storage throughout the war… Bond drove it hard and well and with an almost sensual pleasure.’ Ian Fleming, Casino Royale, 1953

As part of the James Bond celebrations this week to continue the 60th anniversary of Ian Fleming’s first James Bond novel, Casino Royale, it is today announced that Vintage Classics has partnered with Bentley Motors to create a luxury limited edition of the book that introduced Special Agent 007 to the world.

The special edition features an exclusive introduction from racing legend, Sir Stirling Moss, making it a true collector’s item. Just 500 editions will be produced, each costing £750.

The Bentley is James Bond’s car of choice in the original Fleming novels and Ian Fleming was a huge admirer of the Bentley Boys, seduced by their adventures on the racing track. In his introduction, Sir Stirling Moss comments: ‘When it came to cars Fleming really knew his stuff… he must have known that the fabulous pre-war Bentleys won at Le Mans four years in a row from 1927-30.’  This iconic edition aims to capture that spirit of adventure and the glamour associated with these leading British brands.

The book has been created by designers Kris Potter and Stephen Parker at Random House, who were inspired following a trip to the Bentley Motors HQ in Crewe. They comment: ‘We knew that any design we came up with would have to reflect the incredible craftsmanship and heritage we had seen in the Bentley cars at Crewe, the challenge for us was how we could combine this with the coolness and nostalgia of Bond... The inspiration was endless.’

From the hand-bound beluga leather casing to distinctive Bentley features such as hand-stitched embroidery and silver foil page edges, this special edition of Casino Royale is produced with only the very finest materials. Its striking red, white and black colouring is a nod to the gambling theme of Fleming’s first novel, where Bond famously takes on his adversary, Le Chiffre, over a game of baccarat. A special feature of this edition is the bespoke set of playing cards, hidden within a secret compartment.
Key features of the design:

* Presented in an elegant leather clamshell case, this edition of Fleming’s best-loved Bond book is an object of automotive craftsmanship.

* The case and special edition are bound in beluga coloured leather, sourced from the tannery in Italy which provides hides for Bentley’s interiors.

* Each book has a limitation marque with Ian Fleming’s signature, reflecting the plate you would find on a Bentley engine.

* Throughout each book are evocative brush illustrations by the Award winning illustrator Damian Gascoigne.

* Removing the book from the clamshell reveals a hidden compartment. Within this secret compartment lies a leather-bound case of Bentley Bond playing cards.

Published on 13 April 1953 by Jonathan Cape, Casino Royale introduced James Bond to the world. The first print run of 4,728 copies sold out within a month. Following this initial success, Fleming went on to publish a Bond title every year until his death in 1964. It is in Casino Royale where 007 first utters the immortal line ‘Bond - James Bond’ and where Bond first reveals his recipe for the famous Martini cocktail, christened the ‘Vesper’ after the first Bond girl, Vesper Lynd. The artwork for the original cover was designed by Fleming himself, decorated with a heart motif to reflect a playing card.

Quotes on the design of the special edition
Tom Drake-Lee, Vintage Sales Director and Bond Brand Manager:
‘Bentley’s focus on hand-craftsmanship and their use of high-end materials made them an irresistible partner for the anniversary special edition of Casino Royale. It’s a spectacular combination of three of Britain’s iconic brands – Bond, Bentley and Vintage.’

Statement from Kris Potter and Stephen Parker, Designers, Random House
‘We knew that any design we came up with would have to reflect the incredible craftsmanship and heritage we had seen in the Bentley cars at Crewe, the challenge for us was how we could combine this with the coolness and nostalgia of Bond. We were inspired by all the details we saw at Crewe from the iconic double stitching of the leather interior, the power-lines of the body work, the machine turned panels, embroidered head rests, to the bright works of the engraved tread-plates and the engine limitation plates. The inspiration was endless.

For visual references from the book the casino setting seemed an obvious place to start and we felt there should be a strong visual link to the imagery associated with casinos and playing baccarat. The colours of the playing cards, the textures and the excitement of the casino itself informed our choice of colour palette of black, white and red of the nine of hearts. As Bond’s fate hangs on the turn of the nine of hearts card, the idea came to us that if we could hide some playing cards within the book it would both increase the feeling of interaction as well as reinforcing the sense of espionage. We wanted the book to have unexpected elements and a playfulness.

We wanted to enhance the enjoyment of the book for our readers by embellishing the pages with evocative brush illustrations. Award-winning illustrator Damian Gascoigne was commissioned to highlight key points from the text with simple line, giving the pages an energy that embodies both the thrill and excitement of the book. They give glimpses of the plot whilst providing a decorative balance to the text design.

The black leather box is a clam shell design of impressive scale when opened. We wanted this to have real impact and to echo the desire for the unexpected we had seen at Bentley we chose to line the box with a shock of red, only visible in a small flash from the outside. The book itself sits proud from the box and is bound in the same leather highlighting the craftsmanship of Bentley with the use of embroidery on the title and logo and the double stitching. Lastly we incorporated the tread plate design we had seen at Bentley for the spine, which has its own metal plate set into the leather, this has been echoed on the page edges with the use of silver foil.

For the hidden playing cards we wanted to reflect the interior of the cars and looked to the beautiful machine turned panels that would have been in the Bentley Blower driven by Bond in the book. We utilised the dark and light variants to differentiate between the two packs. We wanted the box containing the cards to have the same red lining as the main box and again to have that flash of red around the opening.’
Posted by Bazeer Flumore at 11:26 PM

Thanks for sharing this information. I really like your blog post very much. You have really shared a informative and interesting blog post with people.. 토토사이트, 사설토토, 안전토토

olivermir said...
This comment has been removed by a blog administrator.
6:40 PM

This content is written very well. Your use of formatting when making your points makes your observations very clear and easy to understand. Thank you. wm casino

I can set up my new idea from this post. It gives in depth information. Thanks for this valuable information for all,.. wm casino

Very good topic, similar texts are I do not know if they are as good as your work out. 먹튀폴리스

As for the cost, rights-managed these footage are charged based upon various factors, such as the motive of production, the size of audience and the duration of usage. Charges for royalty-free footage are based upon the format. 스포츠중계

Thanks for your marvelous posting! I actually enjoyed reading it, you could be
a great author.I will remember to bookmark your blog and will
eventually come back from now on. I want to encourage you to continue your great
writing, have a nice weekend!

Thanks for your marvelous posting! I actually enjoyed reading it, you could be
a great author.I will remember to bookmark your blog and will
eventually come back from now on. I want to encourage you to continue your great
writing, have a nice weekend!

I just want to let you know that I just check out your site and I find it very interesting and informative.. 메이저놀이터

Continue the nice function, We study couple of articles about this web site as well as I believe that the internet weblog is actually actual fascinating and it has obtained arenas associated with wonderful info. 먹튀