The Spoils Of Travel

I mentioned during our recent "world tour" that I purchased, or was given (thanks again Darren), a few Bond books while overseas.

All three Gardners in the photo below were found at Russell Books in Victoria, Canada.  The "Licence Renewed" is the copy I mentioned that has a darker brown cover than normal and the gold tint is missing.  I also purchased a couple of Woods that are better copies than I already had and a "Live And Let Die" movie tie-in with a spine that hasn't faded which is quite unusual. 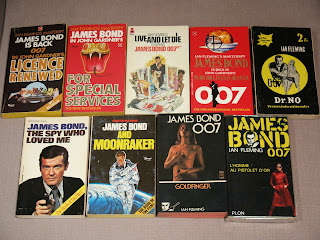 The three French titles above were purchased in Paris, one from a book stall beside the Seine and two from L'amour Du Noir bookstore.  I know it's pretty common but I really like this edition of "Dr No". 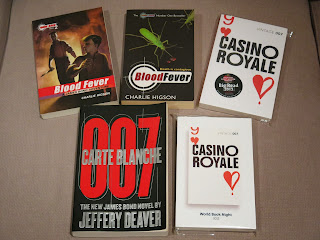 So in total I brought back 15 books of which 5 (possibly 6) editions I didn't already have.  The most notable of these is the UK "Blood Fever" that says "The Number One Bestseller" at the top of the cover.  I had previously believed this cover only existed as a prototype but Darren proved me wrong.  Here's the text I had previously added to PizGloria.com about this cover that I will soon be removing. 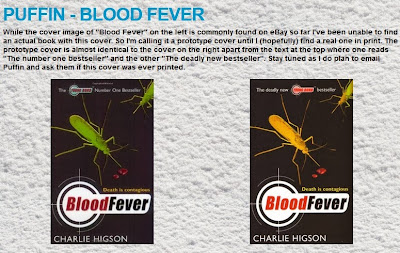