Just over three weeks ago my wife and I were in the UK still on the second last leg of our "world tour".  On a drizzling Saturday morning I travelled on the underground to London where I had organised to meet a guy named Darren, whom I'd never met before.  Darren also collects Bond books and we became friends after he found my PizGloria.com website and contacted me.  When I told him I was travelling to the UK he said we could catch up and show me some London book stores.  I agreed so we organised to meet at the Bond literature specialists Harrington Books. 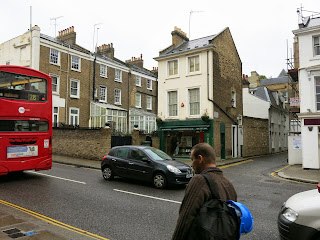 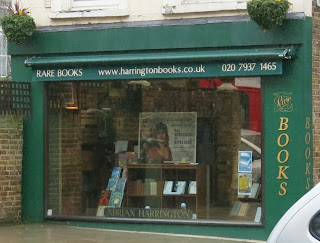 Almost as soon as I entered Harringtons a staff member greeted me and for a moment I thought it could be Darren as I didn't even know what he looked like.  When I realised it wasn't I explained "I'm fine thanks.  I'm just here to meet a friend".  I made my way to the fiction section and found the Fleming books which can be seen below.  A very impressive collection for sale. 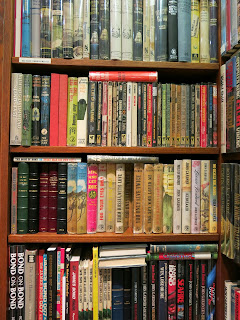 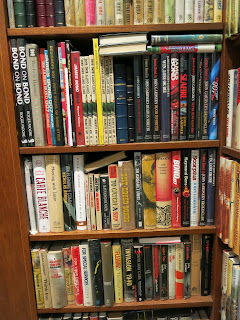 I then walked toward the back of the store, passing a wall featuring a Thunderball poster and some autographed Bond photos. 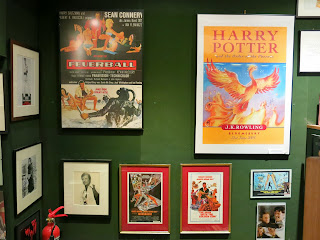 At the back of the store there was a glass cabinet in which heaps of rarer Bond books were on display.  Photos can be seen below (sorry about the reflection). 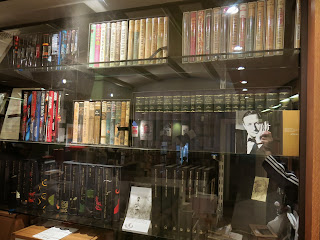 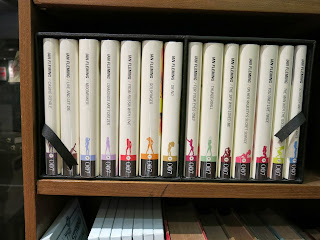 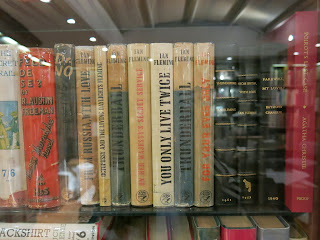 Another staff member greeted me.  He introduced himself as Jon.  I asked "Jon Gilbert?" and he answered "Yes".  Jon is the author of "Ian Fleming: The Bibliography" and is also heavily involved in James Bond First Editions which is affiliated with Harrington Books.  When I first asked if I could take some photos and then mentioned I was waiting for Darren, he said "I know Darren.  He's a regular here".

I noticed a display copy of "Ian Fleming: The Bibliography" and asked some questions about it.  Suddenly Jon was guiding me through his massive reference book, showing me images of rare covers, explaining how a certain cover had just made it in for inclusion and discussing some of the unusual covers he'd encountered.  I felt very fortunate to have such an introduction to the book and I knew I had to buy it.

It was about this time that Darren arrived.  We greeted each other and he was quickly emptying his bag and handing me three paperback books.  "You can have them for free." he said "Just buy me a coffee later".  Thanks a heap Darren.

And if this wasn't enough, suddenly Jon took us into another room to show us his own Bond collection.  Talk about impressive.  When comparing it to my own collection I certainly felt humbled.  And I have never handled such rare books before.  I did happen to take some photos too, and hopefully these will be displayed on the Collectors Corner page of my website soon.

When we finally left Harringtons after about 2 hours, Darren and I then caught a double-decker to Hatchards, the oldest book store in the UK.  Here we asked about the imminent release of William Boyd's "Solo" and whether they were organising any promotion for the book.  "No" was the reply, although they did have a special-edition hard back listed on the computer. 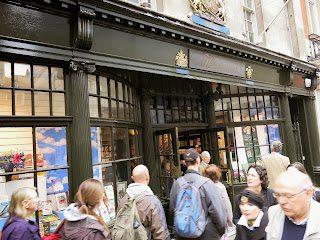 We made our way to the fiction section but couldn't find any Fleming novels. We did manage to find a copy of the last Deaver Bond release with a favourite cover of mine. 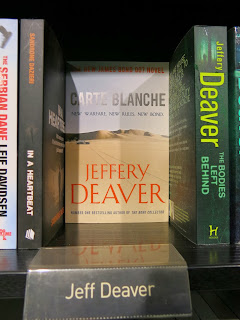 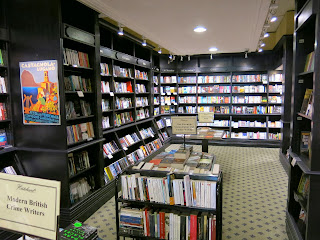 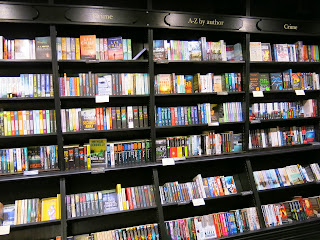 We then walked to Waterstones just up the street where I was hopeful there would be a window display for "Solo".  Unfortunately there were renovations being made to the front of the store and there was no window display.  In fact the front window was barely visible behind the scaffolding.  Inside we found Vintage Books editions of the Fleming Bond novels as well as Orion editions of the Gardners. 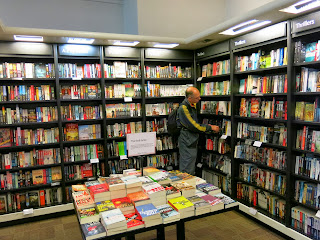 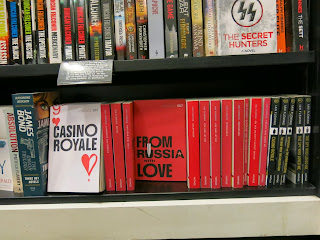 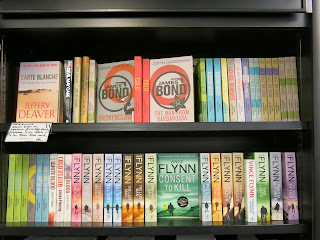 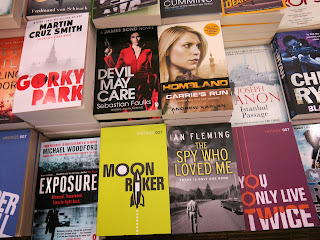 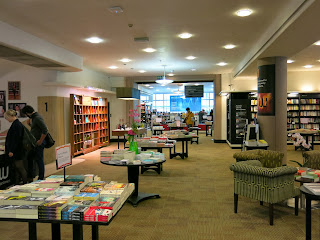 There were also many Higson "Young Bonds". 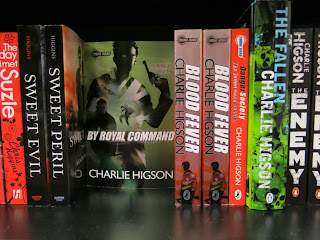 Almost immediately after exiting Waterstones I had to leave Darren to catch up with my wife and Aunt who were waiting for me near Harrods.  And just as I was walking down the stairs at Piccadilly Station, having said goodbye, I realised I hadn't bought the coffee I'd promised him.  Sorry Darren, I definitely owe you a coffee next time !  And what a great morning of Bond books too.

And for those interested here's some photos taken while my wife and I were in the UK: 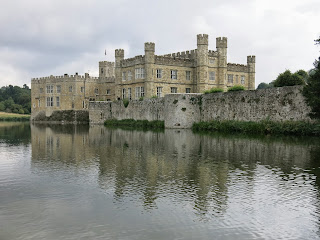 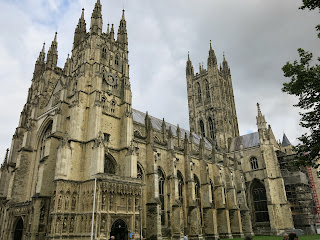 Dover beach with some white cliffs in the background.  Yes, the beach is covered in pebbles 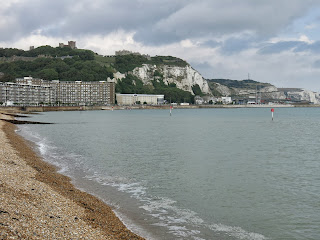 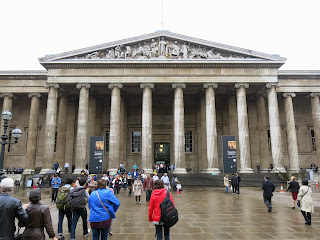 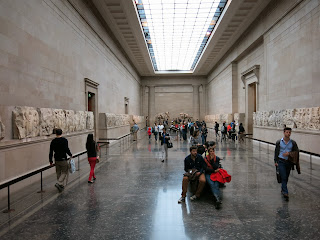 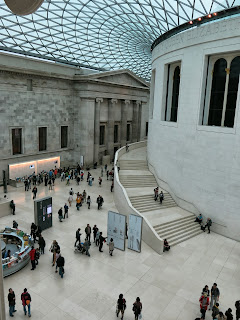 Lower down the river Thames near Marlow 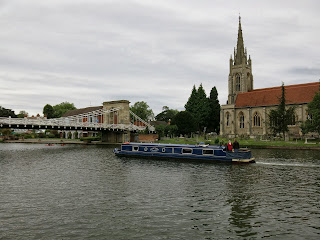 A Reliant Robin still on the road 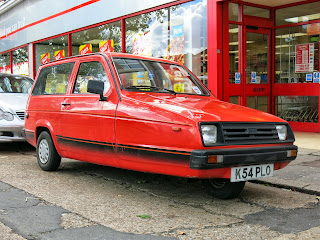 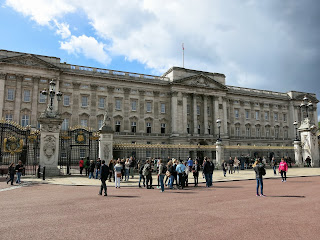 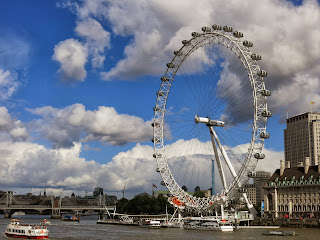 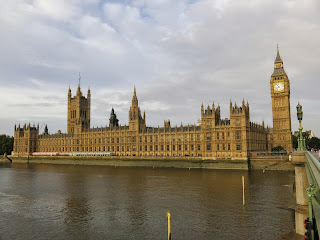 I found your Piz Gloria site today. Very interesting and informative. I have been a Bond fan and collector since I was 12. I live in the USA and my introduction to the books was a near complete set of the 1960's Signet paperbacks. You know, the ones with the 007 in the upper left corner?
I would love to talk to you sometime about collecting Bond books. I would friend you but Facebook is being a bit of a bloody bugger and won't let me.
I hope we can chat.

if you have the time to chat about Bond books.

Hey Randy, great to hear from you and thanks for your kind words about my blog and website. If you go to the PizGloria.com home page you'll find my email address, but I'll send you a response via email anyway, Cheers Bazeer