Today my wife and I, along with my parents, visited the Melbourne Museum to attend the "Designing 007 - 50 Years Of Bond Style" exhibition.  We drove to the City, managed to find a free park close by and then walked a short distance. 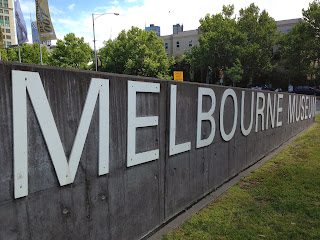 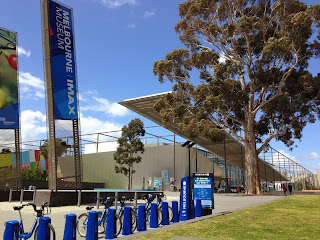 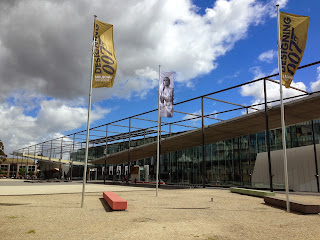 Outside we were greeted by large images of Bond in his various incarnations. 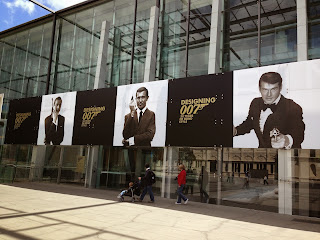 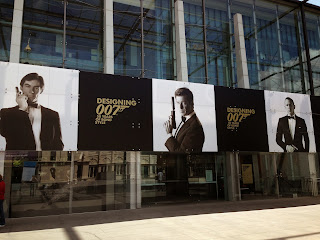 As we entered through the main entrance there was the Aston Martin DBS Vantage from "On Her Majesty's Secret Service" complete with the rifle holder in the glove box.  I still love seeing this car. 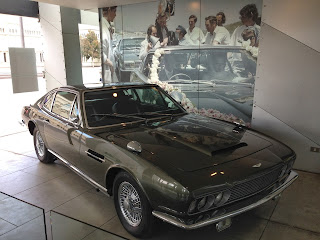 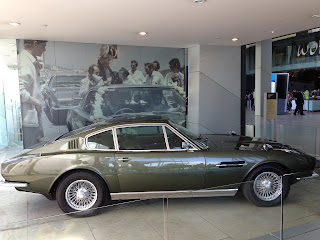 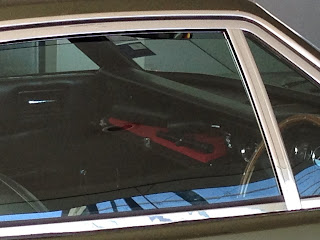 We first visited the Museum Shop which had a window display of Bond items for sale. 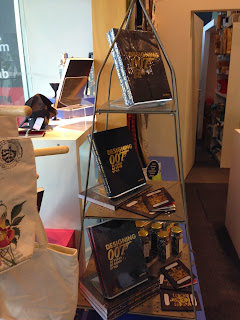 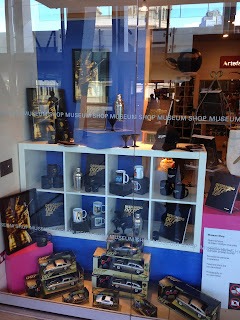 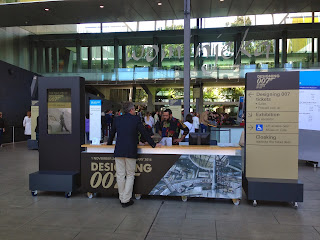 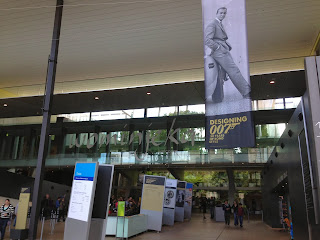 Then we made our way down the escalator to the exhibition proper.  Before entering I managed to grab these snaps from the waiting area.  There was also a bar at the back that had each Bond film represented by a framed foreign poster on the wall and also featured two large printings of Ken Adam's volcano designs for "You Only Live Twice". 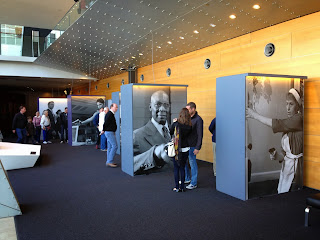 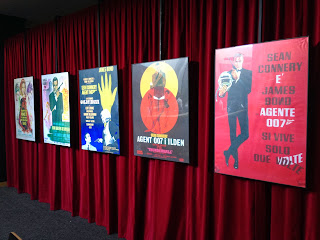 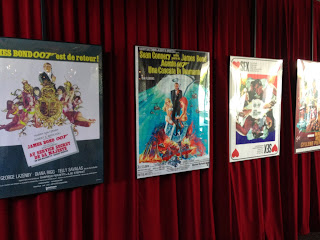 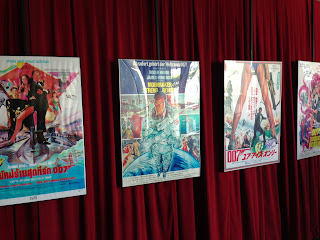 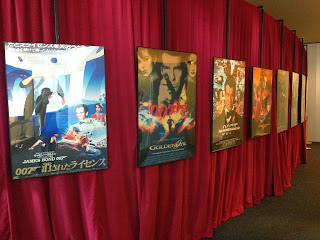 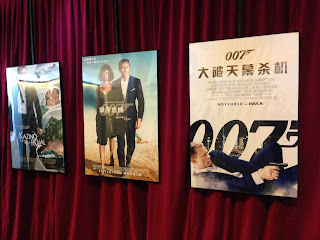 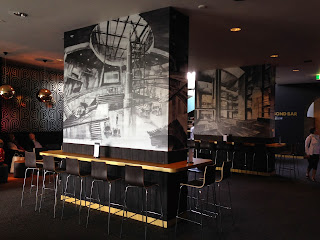 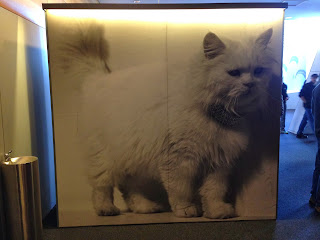 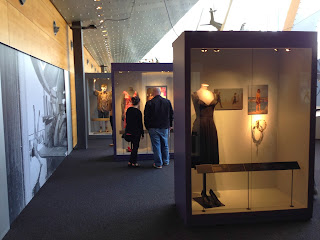 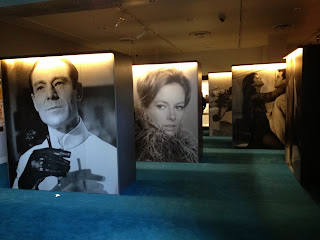 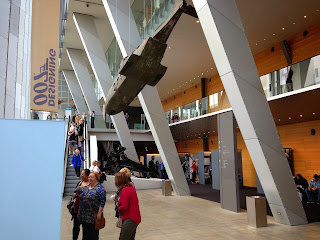 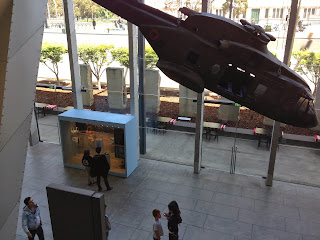 As well as displaying clothes, props and images from the films in the waiting area there were also a couple of vehicles including an Aston Martin DB5 (from "Goldeneye" I believe) with a "Goldfinger" backdrop which suited it perfectly.  From above I later noticed the area of the roof cut for the ejector seat too. 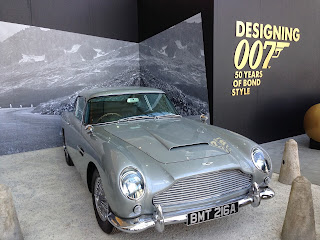 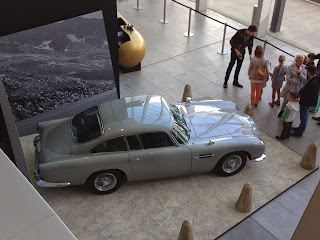 Multiple screens showing the opening title sequences for different Bond films looped as we entered the exhibition through a gun barrel tunnel.  No cameras were allowed from this point on.

The first room had a gold theme.  A painted Jill Masterson mannequin lay on a circular revolving bed while sequences of the same film were shown on a large screen.  There was also footage of "The Man With The Golden Gun" featuring Scaramanga's gun which was also on display.  In the same room I saw the authentic bowler hat thrown by Odd Job (after it had accidentally been given to a Bond fan and then purchased back by EON through a Christies auction) and many gold awards presented to people involved in the Bond films including Shirley Bassey and Albert R Broccoli.

The next room we entered was dedicated to Ian Fleming himself.  There were 9 Jonathan Cape first editions all featuring Richard Chopping's excellent dust jacket designs, a golden typewriter and a large family tree chart of Fleming's family and friends.  Lots of interesting reading here.

The third room was set up as M's office with the red leather doors, a large portrait of Bernard  Lee (which my Dad liked and which also reminded me of a similar one in Matt Sherman's collection) and some Moneypenny mannequins.  There was also a pin board featuring heaps of photos of the suits worn by Bond throughout the series.

Room four was dedicated to the gadgets from Q Branch.  My wife, who always equates Bond with the TV show "MacGyver", felt that the props on display summarised how close the two characters were in her mind.  This room really didn't help my argument to change that perception!  However, I really liked seeing the breathing mouth piece device from "Thunderball", designs for the submersible Lotus from "The Spy Who Loved Me", the MacGuffin encryption device from "For Your Eyes Only" and the attaché case from "From Russia With Love".  But this room had so many props I was impressed and awe struck many times over.  The only downside was, my Mum was a little disappointed at seeing some of the miniatures from the films which partly broke the magic of the Bond movies for her, especially the miniature hot air balloon from "Octopussy".

The centre piece of the next room was a poker table with mannequins dressed in costumes from the films sitting around it.  Circling the room were costumes from the casinos and gambling dens featured in the Bond films.  Three large screens looped scenes from the films showing those costumes as they were seen on film.  My favourites were the white dress worn by Diana Rigg in the casino scene near the start of "OHMSS" and an outfit worn by Jill St John from " Diamonds Are Forever".  Eunice Gayson's reproduction red dress from "Dr No" (purchased just hours before the scene was filmed and held at the back by pins because it was too big for Eunice) and Carey Lowell's original dress from "Licence To Kill" were pretty cool though.

The next room highlighted the exotic locations used in the films (including outer space).   It included many photos, some miniatures and the BMW bike from "Tomorrow Never Dies".

The second last room concentrated on the snow scenes from the Bond films.  In the centre of the room was a small scale version of the Ice Palace from "Die Another Day".  There was a motorised snow ski from "The World Is Not Enough", snow outfits and a large screen showing scenes from many of the films including the famous Union Jack pre-credit sequence from "The Spy Who Loved Me" which I learnt was the most expensive stunt ever performed at the time.

On leaving the "snow room" we made our way through the Bond Shop.  I've never seen as many 007 items for sale in the one place before.  Books, repro posters, games, hats, key rings, t-shirts, cuff links, jewellery, toys, DVDs...  I purchased a repro "SkyFall" poster and a book accompanying the exhibition that features most of the items displayed (see photo below).  I wanted to take a photo in the store but upon asking was told it wasn't possible, however many of the same items can be seen in the museum shop window display photo near the top of this blog entry. 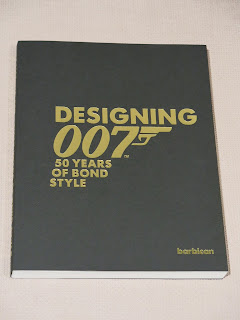 Finally, the exhibition ended with a room dedicated to the Bond villains.  It featured heaps of costumes and props including Blofeld's coat of arms from "OHMSS" and some from "SkyFall".  When I saw others taking photos in this room I took a couple myself, however I'm not 100% sure I was allowed.  (We actually visited this room first as it was near the bar in the waiting area). 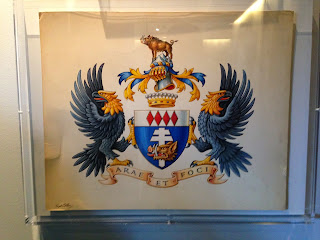 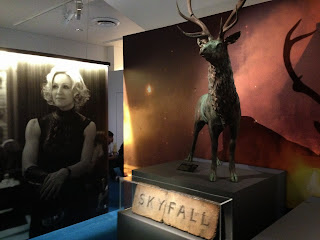 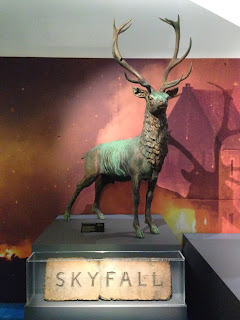 Overall we all thought the exhibition was excellent.  It was really comprehensive and well organised.  We probably spent an hour-and-a-half in total and were amazed at the quality of props, costumes and material on display.  Every film (except "Never Say Never Again" of course) was covered with no bias for one Bond over another which I really liked.  Definitely a great coup by the Melbourne Museum to get this exhibition and well worth a visit if you enjoy the Bond films and cinema magic.
Posted by Bazeer Flumore at 1:25 AM