Today's post is a little different.
Back in early June of this year I received a fourth copy of John Gardner's "Icebreaker" in the mail featuring a skull on the cover.  I started writing the blog post below and then found yet another variant cover online and quickly purchased it.  Four copies became five.  This meant the post below became redundant and was saved as a draft only.  The story of these five covers published by Coronet and Coronet-General in the 1980's can be found here in the post that was finally released.
I've now re-opened this draft post and published some of what I originally wrote.  Any duplicated text copied to the other post has been deleted however I forgot two stories here which others may also find interesting.
------------------------------------------------------------------
Firstly, here's two photos I was going to include when I received the fourth copy.  It shows all the different cover variations of this paperback I owned at the time: 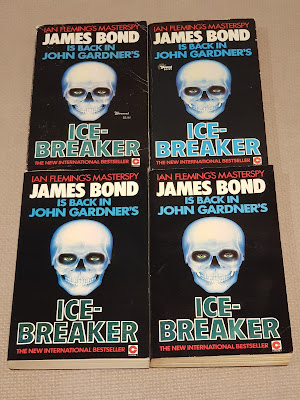 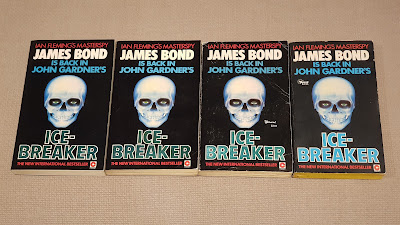 Story 1:
In a recent post in the James Bond Collectable Books Worldwide group on Facebook a collector named Ian S. commented that he'd recently added a paperback copy of John Gardner's "Icebreaker" to his collection.  The cover image he included was this one: 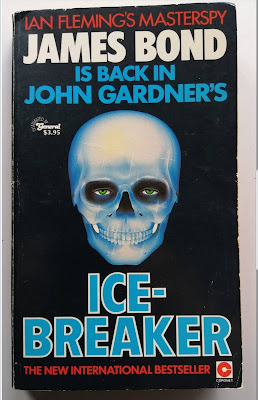 I decided to contact him with "Hi Ian, I liked your recent post on the 'vampire' Icebreaker and then realised I didn't have a copy myself !  I have 3 different covers of this book but not a Coronet-General one matching yours.  Thanks to eBay I was able to remedy that situation this morning.  Thanks for the post, cheers Baz"
He responded with "You're welcome! It was thanks to your Piz Gloria website that I even knew of the alternative cover in the 1st place. I got one a couple of years ago, and thought the price on this one was too good to pass up. Then I realised it wasn't a sticker on the cover and double checked Piz Gloria to see if it was there.
Also, it's interesting that the distributed mark is in a different place."  He also added that "You have probably already noticed that the Canadian copy has the title in blue while the UK  edition is metallic."  He then sent this image: 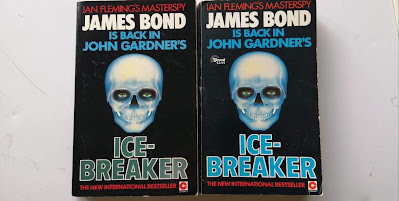 Story 2:
After I'd purchased the similar copy on eBay, with the light blue title text, I asked the seller to please send the book well packaged so it didn't get damaged in transit.  She replied "I keep bubble wrap in business.  Will keep it well protected for the trip.  This book was my Dad's; he would have loved the idea of it going to Australia.  Enjoy"
Posted by Bazeer Flumore at 10:07 PM