Back in 1983 when UK publisher Coronet released John Gardner's third James Bond adventure in paperback format the cover featured a white skull on a black background.

Initially I thought all first paperback printings had exactly the same cover, but several years ago I read John Cox's The Book Bond during a discussion he'd had with Dan Gale and discovered there was a slight variant cover.  This cover is now known as the "white fangs variant" and can be seen as a white area in both corners of the mouth of the skull.

In the photo below the left is the "white fangs variant" while the copy on the right is the standard version. 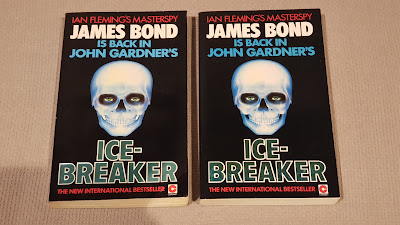 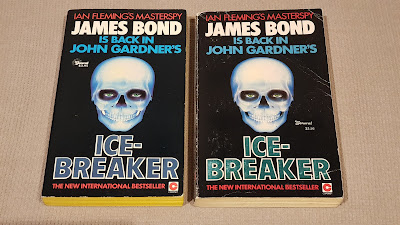 And just when I thought I had all variations of this cover a fellow James Bond book collector, Ian S., sent me a message explaining he'd found another variant.  I managed to find the same cover for sale online and last week this copy arrived in the mail.  As you can see below the title text for this variant cover on the left is a light blue colour.  While the cover on the right (a duplicated cover from above just for reference purposes) is the usual metallic title text.  Again this is a Coronet - General Books printing. 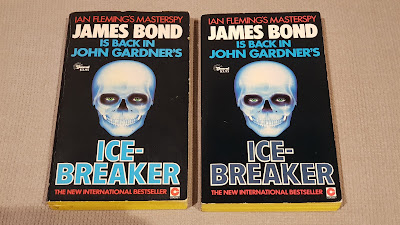 Surely these are all the different cover variations of this printing of "Icebreaker"... but I'm not holding my breath !
Posted by Bazeer Flumore at 10:33 PM