The first parcel of books were for a particular cover of John Gardner's "Icebreaker" which I discussed in my last post.

The second parcel also contained a John Gardner title published by Coronet-General Books, this time "For Special Services".  The book is shown on the left in the photo below.  These two books are identical except for one point; the silver title text.  The cover on the right shows what the silver text should look like.  The cover on the left  has misprinted silver text. 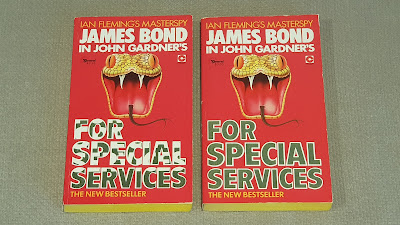 I'm not a book printing expert however when I posted this cover image on an online Facebook group a number of people suggested how it could have occurred.  If you're interested I listed them on my Less Common Books And Ephemera page on PizGloria.com.
Posted by Bazeer Flumore at 10:59 PM