Two days ago I posted about a pair of "No Time To Die" one-sheet posters released in 2021.  Today I received another Bond related poster... but this one is almost 40 years older. 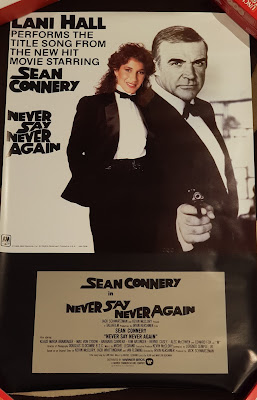 I was a bit concerned when the poster cylinder arrived and one end of the rolled poster was exposed but fortunately (somehow) it was undamaged. 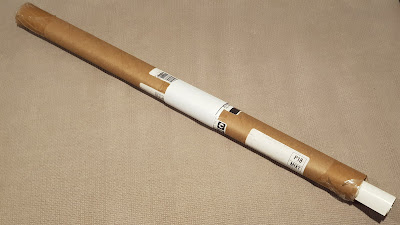 The poster measures approximately 61 x 91 cm (24 x 36 inches) in size.
The unofficial James Bond film "Never Say Never Again" was released in 1983 starring Sean Connery in his seventh and last performance as 007.  The film has proven to be divisive amongst Bond fans, especially over the film's soundtrack which includes the theme song by Lani Hall.  Personally I love this theme song however it could be because this film (and "Octopussy" starring Roger Moore also released in the same year) were my introduction to Bond at the cinema.
As an additional comment, last year I also recieved this Japanese film programme for the same 007 adventure. 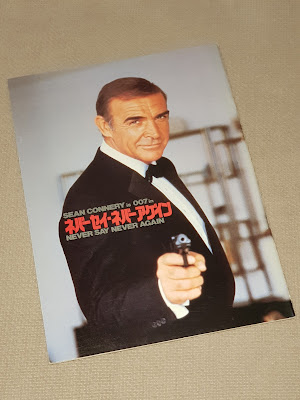 Being a less popular Bond film promotional items like these are still easily available for reasonable prices.  I wonder how long that will last though and if the film will ever be re-evaluated as others have.
Posted by Bazeer Flumore at 9:55 PM

Love seeing the posters. Only allowed to have one on the wall, and all of mine are stored under the bed unfortunately :(

Haha. And most of mine sit in cylinders in a cupboard

Wish I could do that. Probably have closer to 80 now, & find they don't take up too much space under the bed. The daybills are easy to store thankfully. Bought an A1 folder from an arts and crafts store which stores them nicely :)

Hi Brendan, thanks for the suggestion. An A1 folder sounds like a great dea. At least it would be easy to view them then