Earlier this week I received seven James Bond novels printed in the U.S. in the 1980's by Berkley Books.  I already have copies of these editions in my collection however this lot sale contained books that were described as "unread in fine condition", and on opening the box I was pleased to see the books were indeed so. 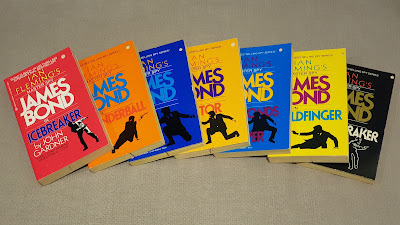 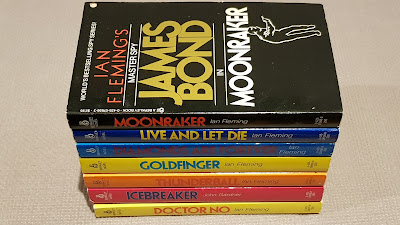 Six of the titles are by Ian Fleming, with one by John Gardner.  As soon as I can I'll scan these covers and replace the images on my website that aren't in as good condition.

I like this series simply because of the matching covers by different Bond authors.  There aren't many series featuring this crossover, the last by my recollection was a series of covers by Michael Gillette where further Robert Markham and John Gardner titles were released by the German publisher Cross Cult.  Sadly I only have one German continuation novel which is shown below.  They were all numbered in order on the spine too with this title being 15. 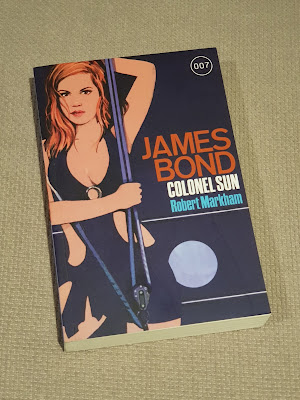 Lastly, if you'd like to know more info about the Berkley/Charter U.S. covers I refer you to this post by Jon Cox on The Book Bond website which was written in 2011.

PS: You may notice on the photos of the Berkley Books there's a hole punched in some of the covers.  This designated these books as remainders (ie. unsold stock) that had been returned by the bookseller to the publisher and they would have later been sold at a cheaper price.  Living in Australia any Berkley/Charter Books without these remainder marks are extremely rare.  The images of the covers on my website "may" have been photo-shopped to remove the remainder marks.