Last night I went to Chadstone Shopping Centre to see a film with some friends ("Django Unchained" - really good film if you can get past the racism and violence).  Prior to the film starting my wife and I walked around the centre and visited a few shops.  One of those stores was the Omega Store.

Now I've previously blogged about Omega in the past and their Bond displays but I've never been able to get any advertising material.  How I wish I lived near a waste land-fill site, the amount of Bond posters I could find would be amazing !

Last night was different though because this Omega Store had a complementary magazine on display for visitors, "Omega Lifetime".  So I picked up the last copy. 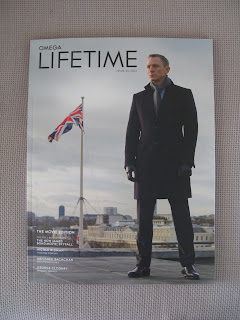 After the film had a bit of a flick through it.   The magazines's great.  There's over 40 pages dedicated to "Skyfall", Sam Mendes, the watches in "Skyfall" and a photoshoot with Berenice Marlohe.  The quality of the photos is what got me - very nice.  The articles were all written prior to "Skyfall's" release but the one's I've read so far are very interesting.  And I personally didn't know that both Sam Mendes and Daniel Craig both liked "Live And Let Die" as much as they do.

A great addition to my Bond collection !
Posted by Bazeer Flumore at 3:54 PM