Today I received the 550th English language James Bond novel for the Piz Gloria website.  I purchased it from a business named 1st Choice Used Books.  I don't normally promote on-line book stores however this one offers really cheap books and postage, and from a pamphlet also included in the envelope I read that they have a "being green" policy which really impressed me. 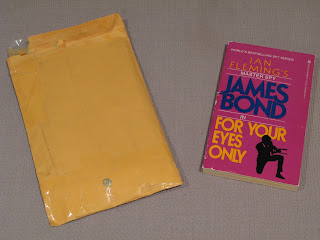 Anyway, this copy of Berkley's "For Your Eyes Only" was printed prior to 1985 which means it lacks the "Featuring From A View To A Kill" film tagline at the base of the cover unlike the two other similar Berkley/Charter covers already on the website.

I'll be adding a scan to the website ASAP.

Have had mixed luck with buying online. Late last year I ordered A Triad/Panther DAF (I already have one, but the quality of it isn't as good as the rest of my set) and they sent me a '65 Signet instead!

I know what you mean Luke. I always ask for a photo of the cover and spine first. But even then you can still get dudded. You can't beat the old book store

I had the Berkley Flemings years ago but for some reason, I no longer do. I suppose I loaned them out and they were never returned. I would love to get the set again though. I have a terrible time reading the 007 Thrillers set from the 1960's.