I received my first novel in the Vintage 007 series today via the post - "Diamonds Are Forever". One thing I really like is the last page of the book reads "James Bond will return in From Russia With Love".  Great little touch during the 50th anniversary year of Bond on the cinema screen. 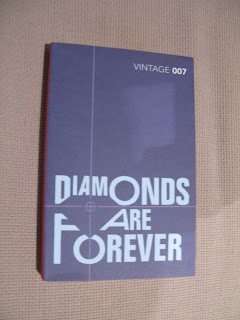 Before coming home from work tonight I visited Readings in St Kilda.  While there I thought I'd found a great copy of "Silverfin" in the Kev Walker Young Bond series, until I noticed a big scratch on the shiny silver spine.  Spewing !  The hunt continues...

I also received some bad news today from The Astor Theatre.  On Saturday, October 13 they're showing a screening of OHMSS and before-hand there will be a Q&A with Mr George Lazenby.  The event has been an anticipated highlight of mine for a while now, especially at the prospect of a photo and autograph with the man himself.  I've been telling heaps of people about it, drumming up the numbers.  Even my wife said she'd come along (she's never seen the film).  But news came through today that while Mr Lazenby will still be participating in the Q&A he will no longer be available to sign autographs or participate in any photos.  Mr Lazenby is appearing at the Armageddon Expo 2012 that same day in the City so that might be the only way for me to grab a photo and autograph.
Posted by Bazeer Flumore at 9:20 PM

I met George Lazenby in Atlanta, GA USA in the Summer of either 2002 or 2003, I seem to have forgotten. I had the cover insert for OHMSS from the DVD signed. Very friendly and personable man.
At the same show I met the incredible Richard Kiel (JAWS) and he took was terrific, he and I had a nice conversation about his Jaws days and I got his autograph and a few pictures with him.