It was a beautiful day in Melbourne last Saturday so my wife and I decided to take a trip to the City.  As well as visiting some clothes and handbag stores and having a great lunch together, we also visited the following stores:

- Basement Books (second hand) - a few Gardners
- Dymocks (new) - just the seven current Vintage "There Is Only One Bond".  Also some "Kev Walker Young Bonds" but unfortunately all damaged - must be a problem with the cutting process where the plastic film slightly separates from the cover on the edges
- Kay Craddock (antiquarian) - none
- Reader's Feast (new) - "Kev Walker Young Bonds" but unfortunately again all damaged
- Kill City (second hand) - three 60's Flemings and a couple of ex-library hardbacks
- W.H.Smith (new) - had a "3 for 2" sale featuring the "Popular Penguins" including "Casino Royale"
- Reader's Feast in the State Library (new) - none
- Embiggen Books (new) - none.  My first visit to this store.  Very nice
- Hill Of Content (new) - none

So overall an unsuccessful hunt however it was nice to get out of the house and spend the day togther, plus we walked for about 3 hours so we're a bit fitter now.  I would have included some photos but we decided to not take our phones.  Sometimes it's nice not to be contactable.  I've included an image of the Kill City business card which I picked up though. 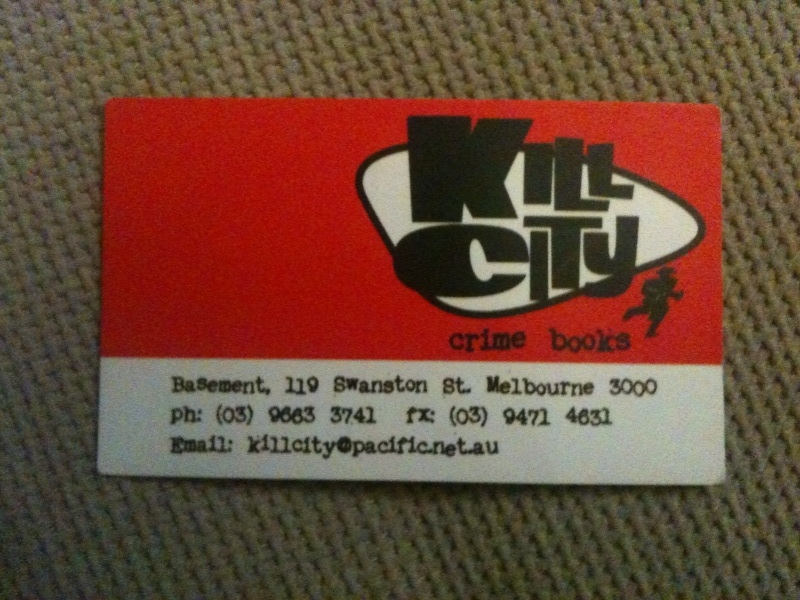 On Sunday I caught up with my Dad at a soccer game.  He'd been to Baxter with my Mum earlier that day and visited the Baxter Market.  Apparently there were a couple of faded Flemings but no luck there either.