"No Time To Die" With The Family 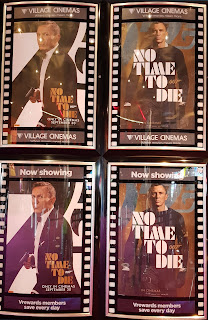 This afternoon I went to the cinema with my wife, Mum, Dad and brother to see the latest James Bond film and the last starring Daniel Craig.  It's not often we all go to the cinema together but the release of a Bond film is a big event in my family.  We had to show our vaccination passports and it was the first time we'd been to an actual cinema since June.  Afterwards I got everyone to rate the film and add a short comment:

Brother - 3.5/5 - Good Bond film, loved the "On Her Majesty's Secret Service" references throughout, good action scenes, interesting ending. But Bond will be back.

My own rating - 4/5 - A very different Bond film and a fitting swansong for Daniel Craig.

Now I will just add a few further notes below which may contain ** VERY MILD SPOILERS **:

Negatives: I found the film a tad long and was disappointed that the villain was introduced late in the film and in my opinion underused.  I was also annoyed at the ease of the death of some SPECTRE agents.

Positives: The continuation and conclusion of the Daniel Craig / Bond arc was great.  I enjoyed the pre-credit sequence.  The main titles harked back to many previous Bond films, most notably for me the "dancing dots" from "Dr. No".  The acting by everyone was great and I think my favourite sequence was the Cuba shoot-out.

Interesting Facts: As far as I recall this is only the second time there's been a flash-back sequence in a Bond film (the first with Bond looking out a window in "OHMSS"), but the first flash-back of a character other than Bond.  The scenes featuring portraits of previous incarnations of "M" linked Daniel Craig's Bond to many previous Bond actors which was fascinating; for instance Timothy Dalton and Daniel Craig share the same universe.  And finally, I'm also curious (and excited) now Daniel Craig has left the role how they will continue the series but as it says at the end of the closing titles "JAMES BOND WILL RETURN".

Email ThisBlogThis!Share to TwitterShare to FacebookShare to Pinterest
Labels: James Bond, No Time To Die