When I first starting collecting James Bond novels it wasn't easy to find out the names of each book series.  There was no internet nor Ian Fleming Bibliography for reference.  So series titles were either little known or perhaps even untitled.  Now Bond series titles like "Still Life", "Raymond Hawkey" or "Girls On Guns" are well known to collectors.

One series whose title I was unclear about for many years was published by Great Pan in the early 1960's.  The series had "painted" covers and featured an impression of James Bond (pre Sean Connery era) at the base of each cover holding a gun.  That figure was based on Ralph Vernon-Hunt who worked for Pan at the time.

There were seven Ian Fleming titles released in this series.  Click here to see them all.  When I was first collecting this series it took me years to find the copy of "Moonraker" shown.  I'm not sure why but this was definitely the hardest title to find in this series.  When I created the PizGloria.com website I had no idea what this series was titled, so I named it "Ralph Vernon-Hunt", but collectors (and experts like Jon Gilbert) now refer to it as the "Director" series.

As time's gone on I've seen less books featuring Mr. Vernon-Hunt in secondhand bookshops or for sale online.  They're definitely becoming scarce and those available often demand premium prices.  That's why when I saw this copy of "Live And Let Die" online for $10 the other day I had to snap it up.  Let's see if it's still possible to collect this series for a second time without paying a premium. 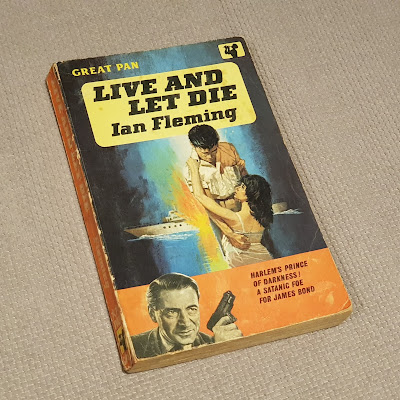