Having revisited Vancouver tonight, I thought I'd also quickly revisit Paris from our holiday last year.  Here's a couple more photos and stories that I didn't previously include in this blog.

Unfortunately I didn't find the famous Shakespeare And Company while visiting Paris but I did find Gibert Jeune on Boulevard Saint-Michel near Notre Dame.  Gibert Jeune have a number of stores containing different types of books in Paris (eg. technical, art etc).  I visited the store containing both new and second-hand fiction books.  You can't see them in this photo but there are actually a couple of security guards out the front of this store to control how many enter I suppose.  On another day when my wife and I walked past there was a short line of people waiting to enter. 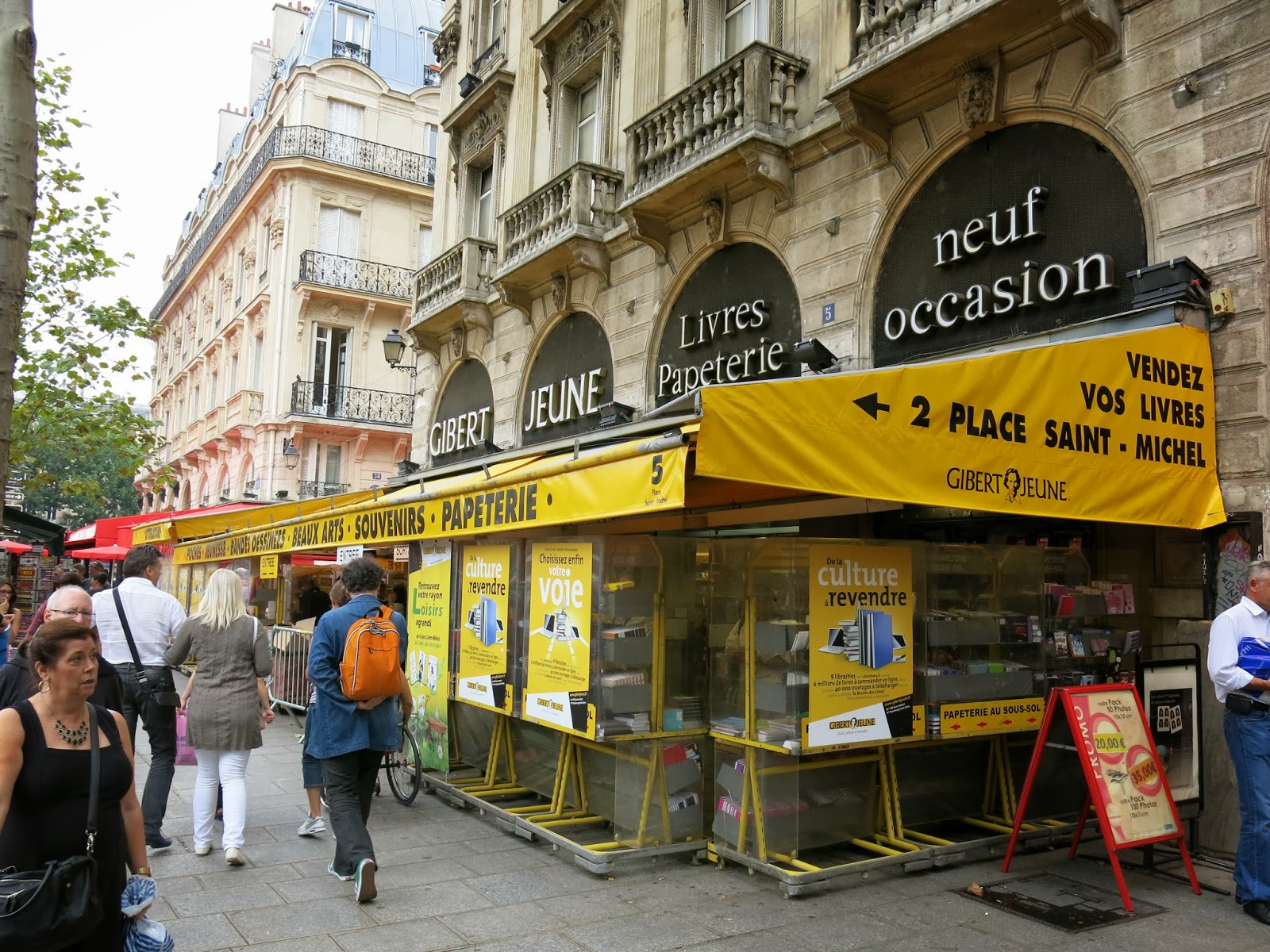 This particular store is four storeys high.  There is a single staircase around the inside of the building although I think I saw a lift somewhere.  I imagine the building is quite old too.  My pigeon French was sufficient enough to be directed by a staff member to the Action/Thriller/Spy section on the top floor where I found the following French Bonds including the two Fleming omnibuses below.  Both feature Timothy Dalton on the cover, one new and the other second-hand. 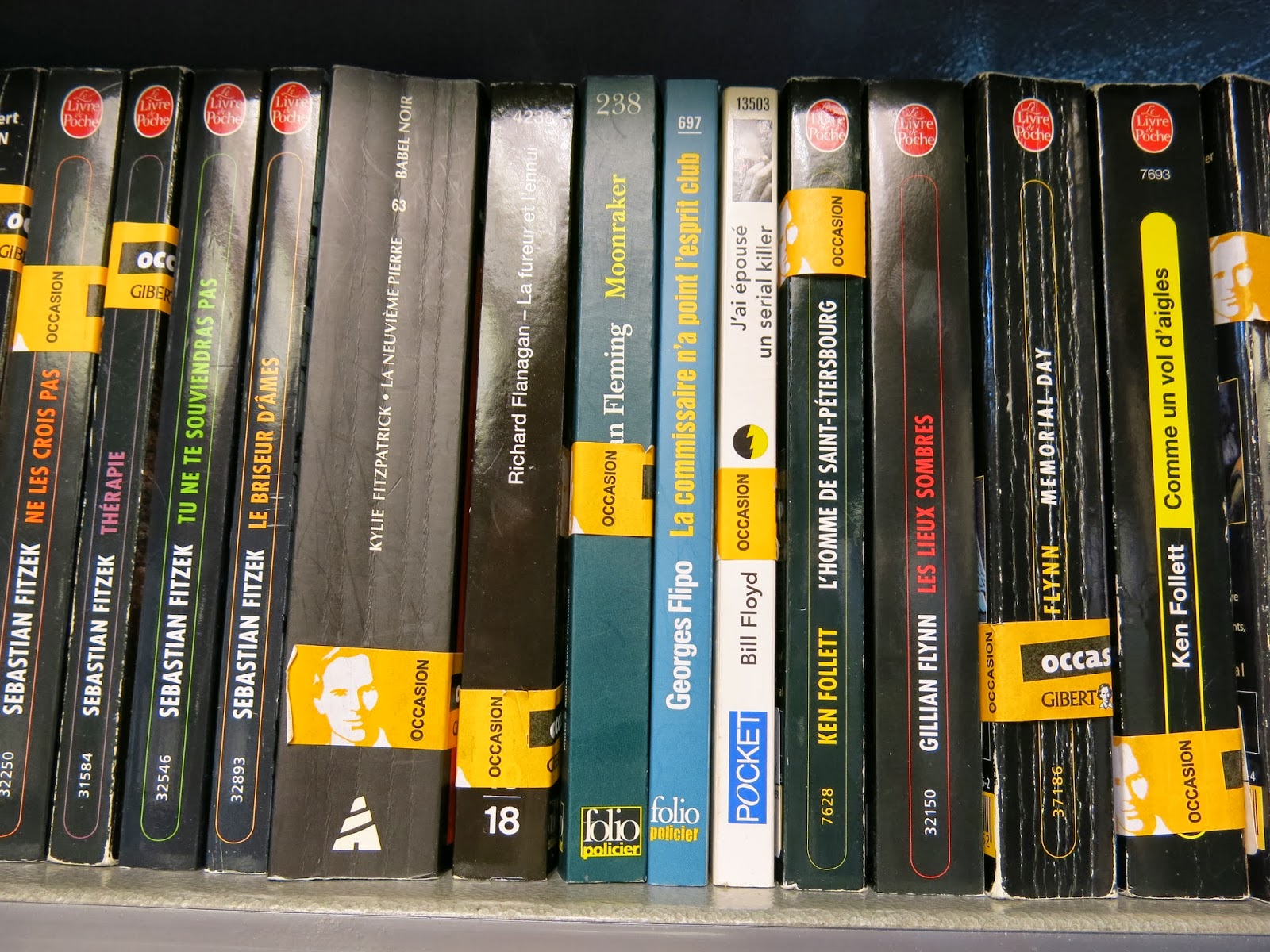 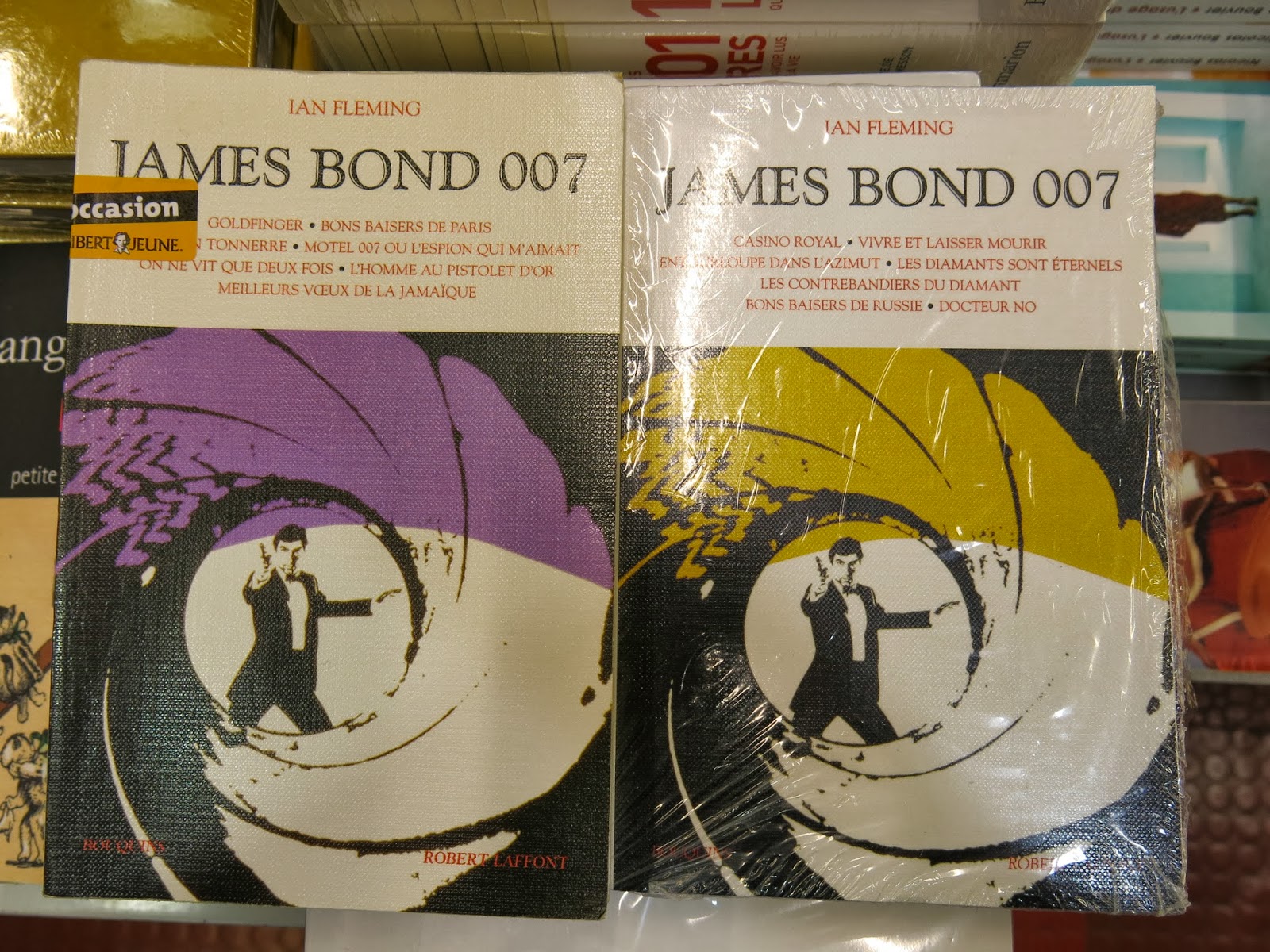 And a French copy of Deaver's "Carte Blanche". 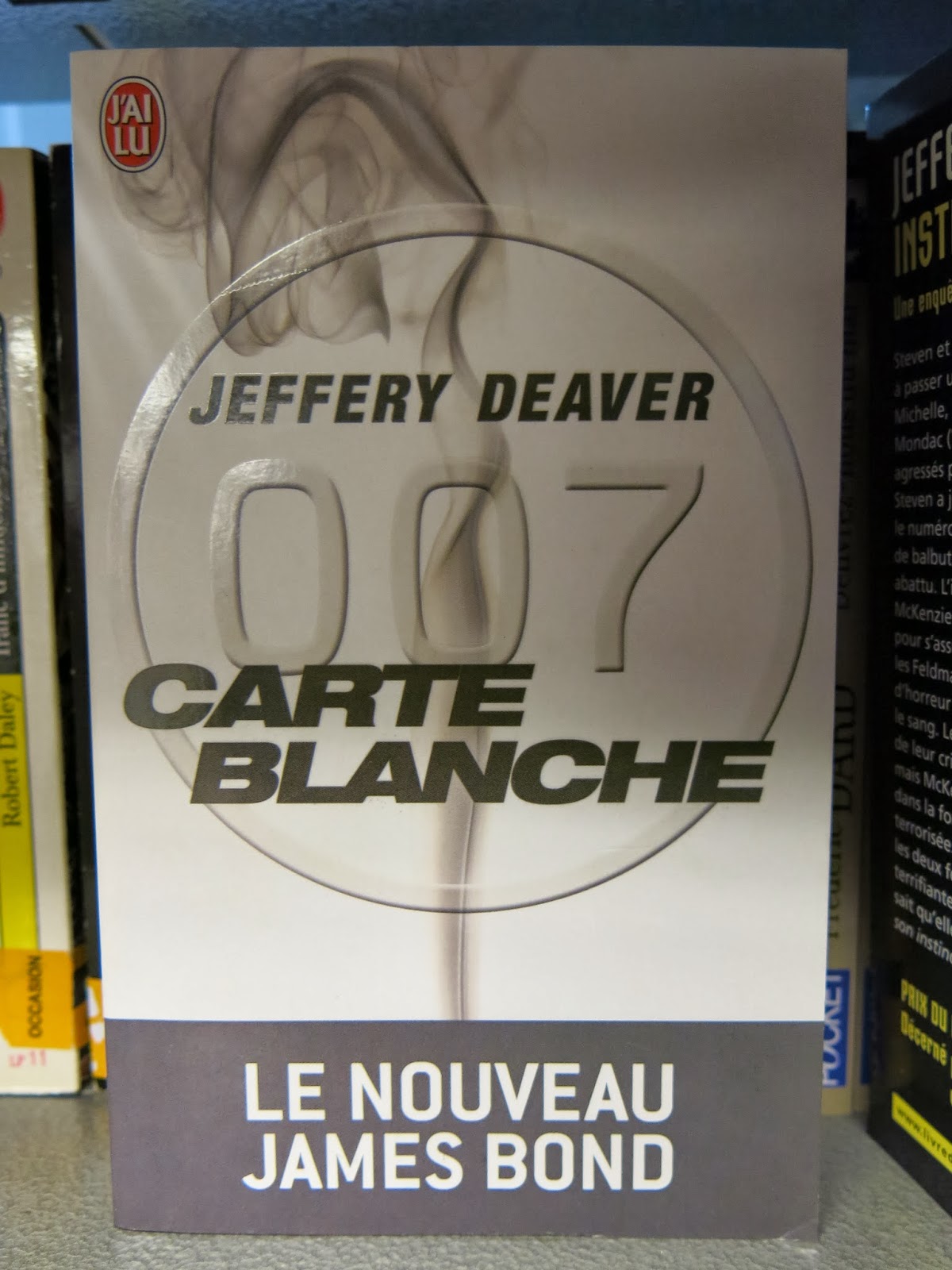 I also asked if I could take some photos and the staff member said Ok as long as I didn't concentrate on any people.  I wish I'd taken another photo though.  There was a bloke with a poodle in the store.  He must have carried it up the four flights of stairs. 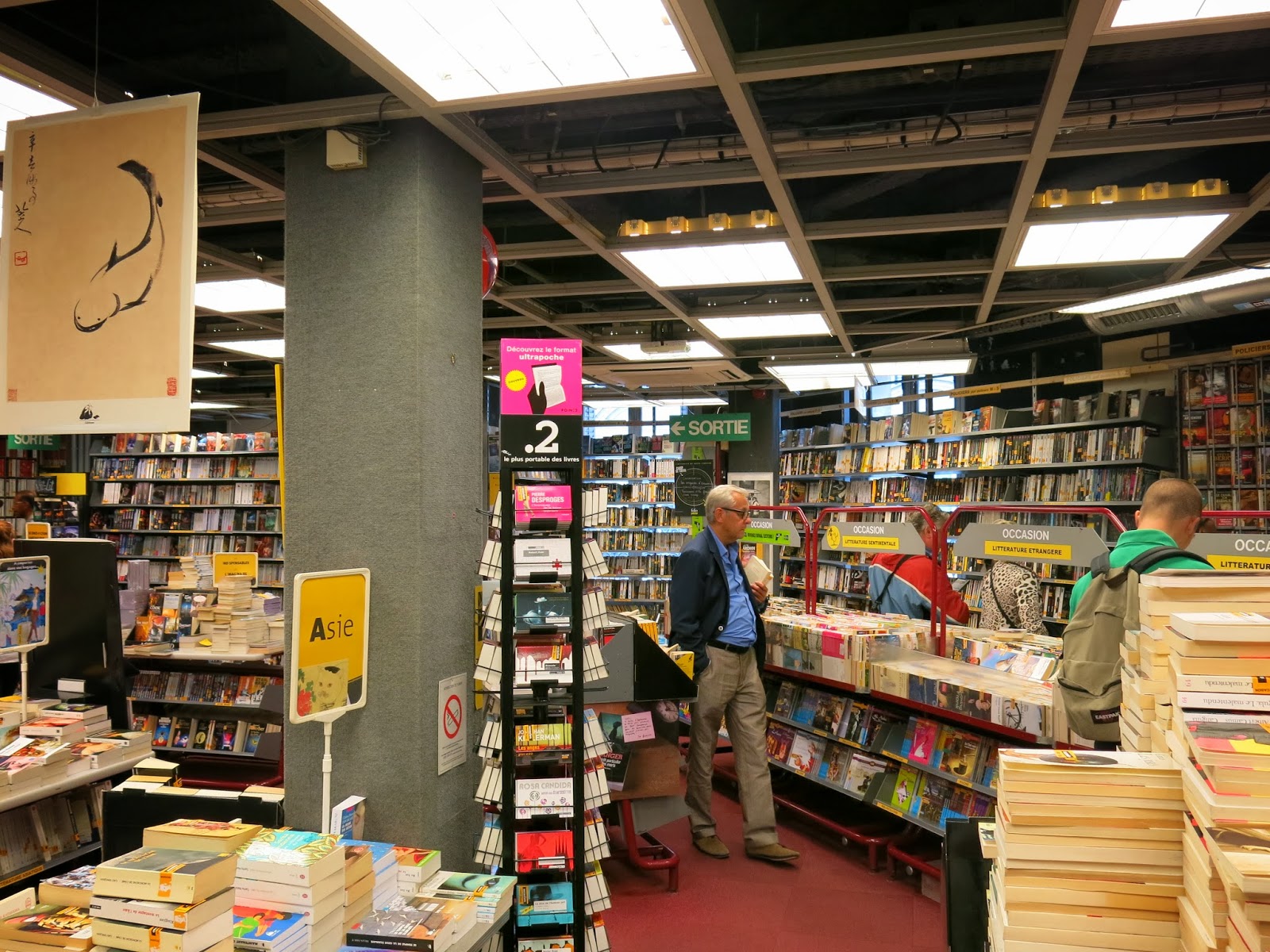 A quick stroll up Boulevard Saint-Michel perhaps just one block from Gibert Jeune... 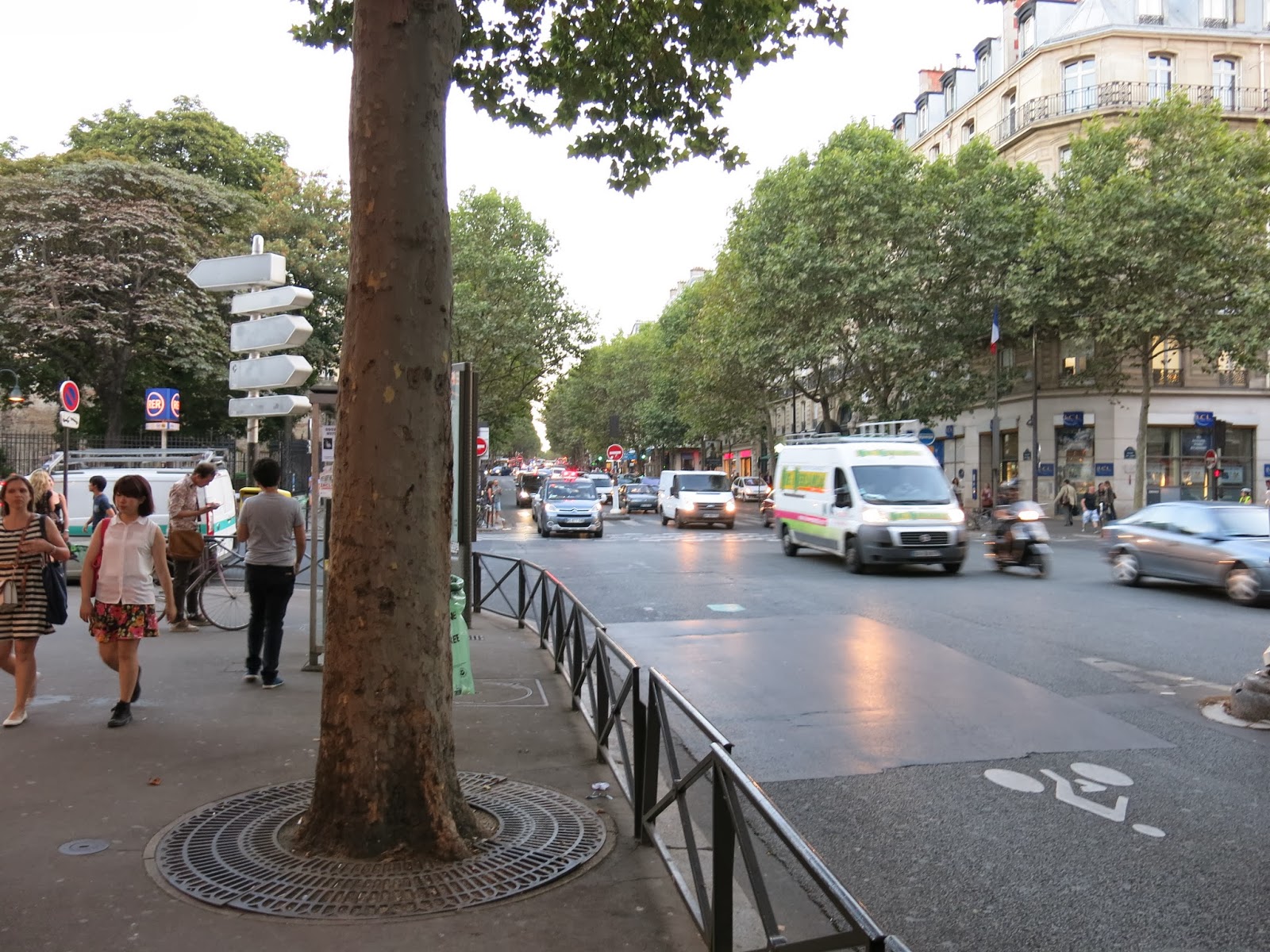 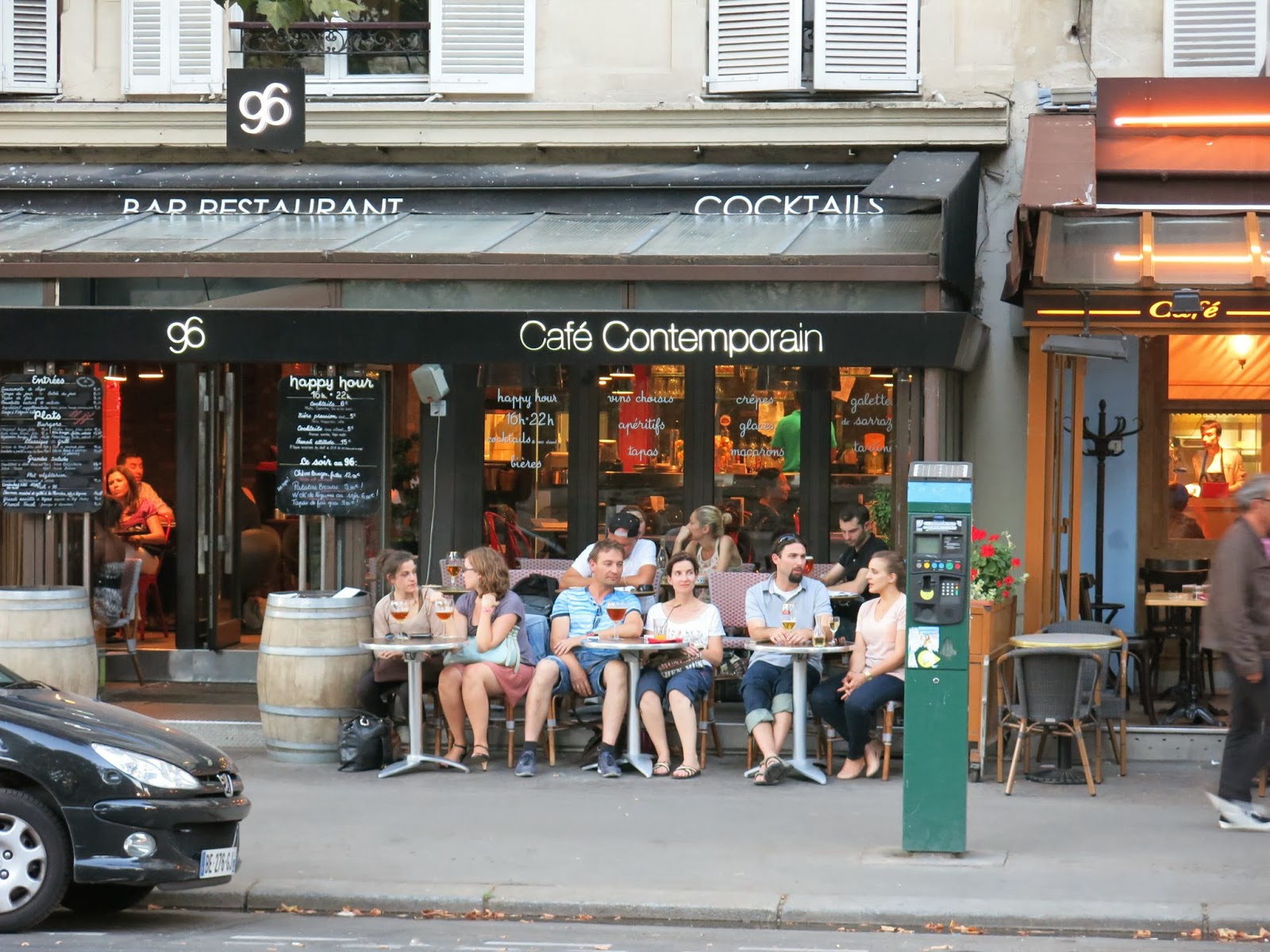 ...can be found a couple of second-hand bookstores like this.  Almost all the books are second-hand and people are always frequenting the store, even into the later hours. 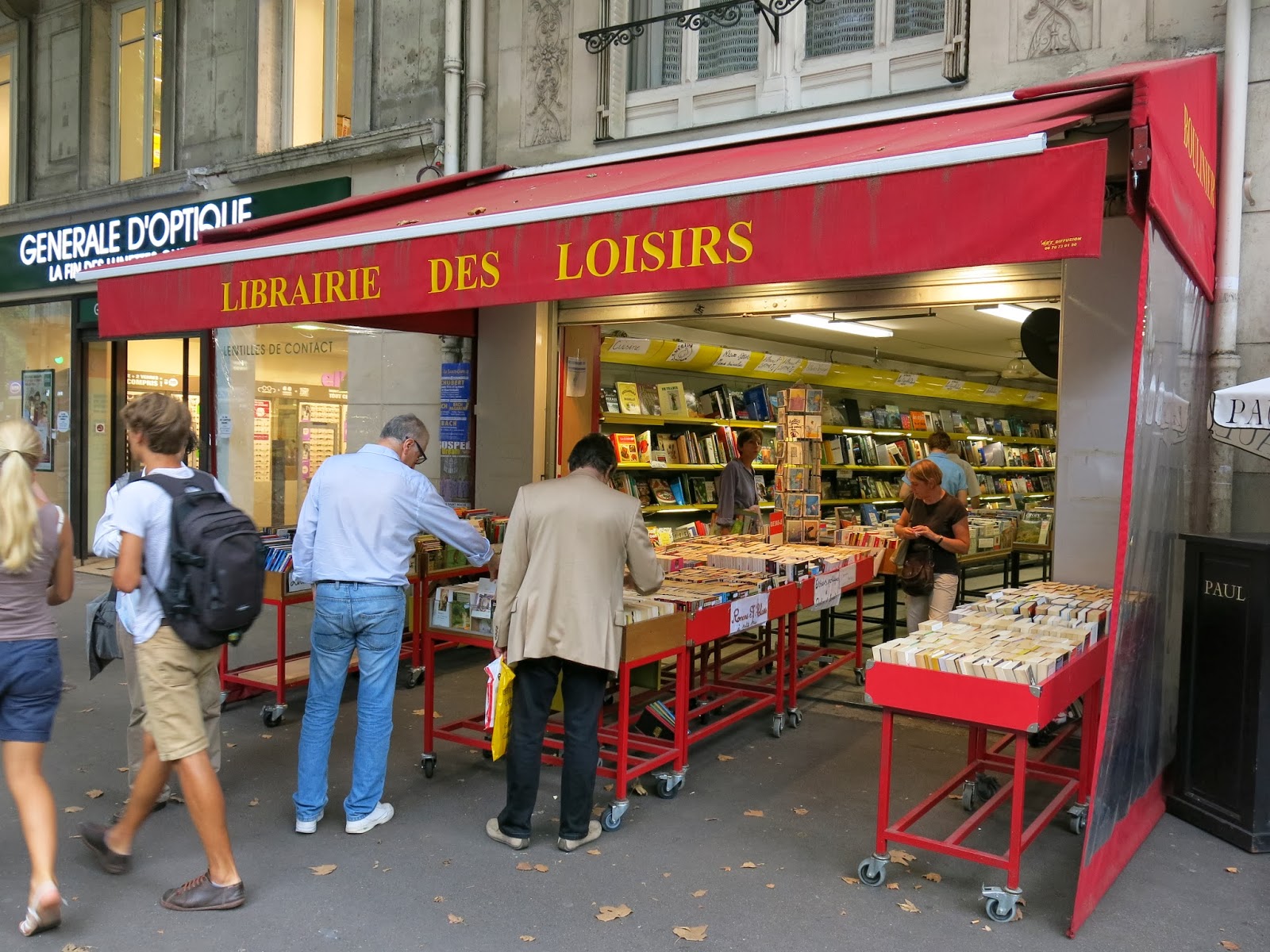 In this particular store I found these two Bonds. 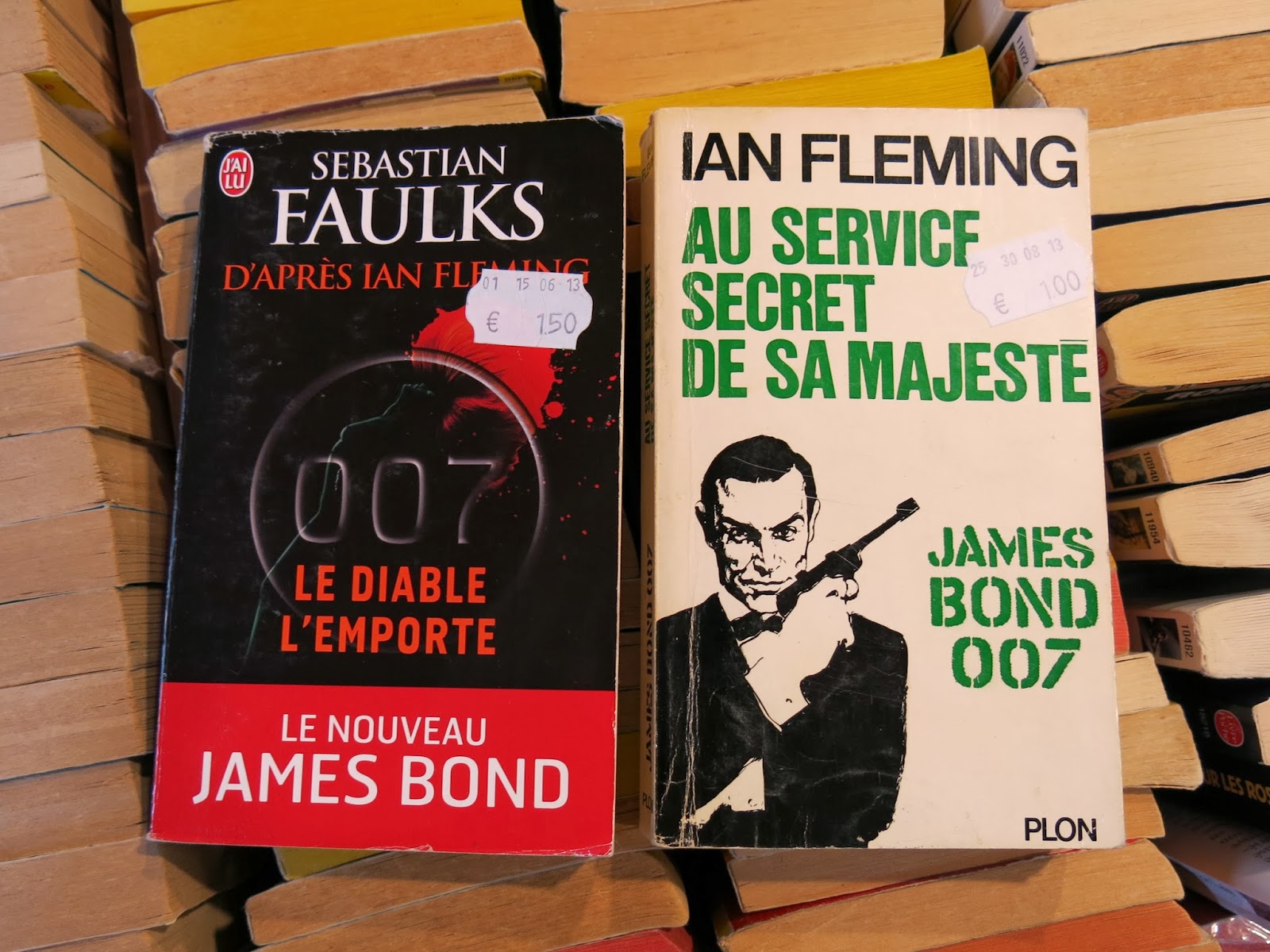 And here's another similar store opposite our hotel.  This one was two storeys of books, although upstairs seemed to be mostly Manga.  You can see how busy it was. 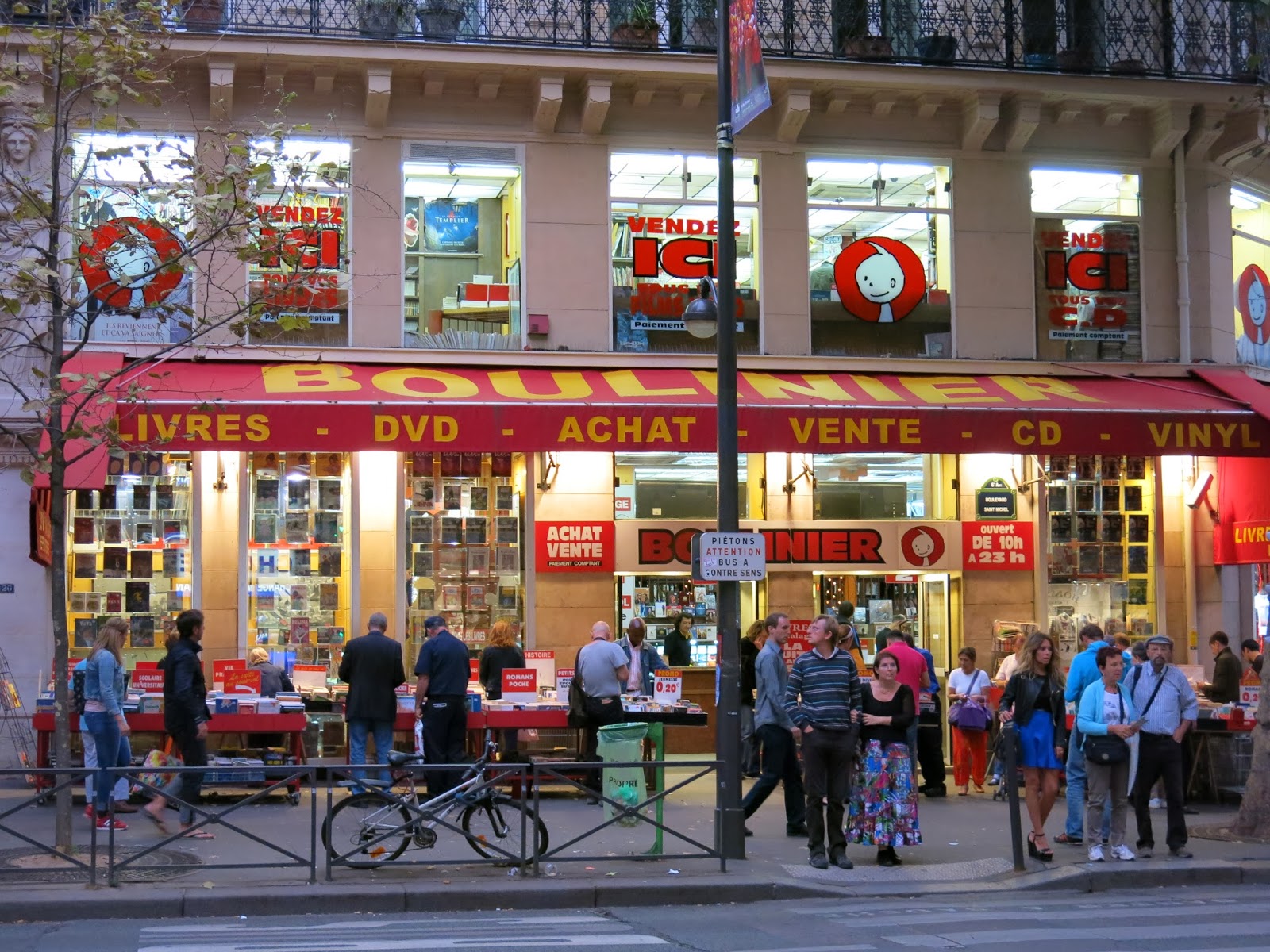 Along with the book stalls along the Seine, Paris appears to be alive and well with new and second-hand book stores.  And heaps of people are still buying the books too which is good.
Posted by Bazeer Flumore at 1:38 AM